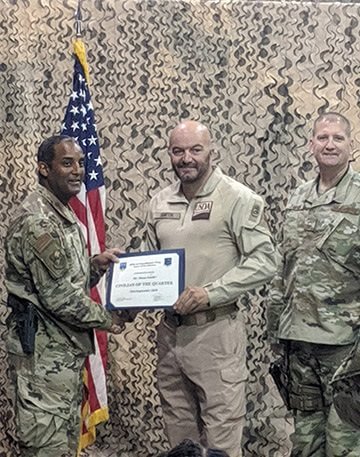 Donated photo. Pictured middle is Christopher “Shane” Smith, a 1995 Haywood Community College Fish & Wildlife Management Technology graduate. He recently returned from a four-month deployment overseas, where he earned seven awards for distinguished assistance to the US military in Afghanistan.

Christopher “Shane” Smith, 1995 Haywood Community College Fish & Wildlife Management Technology graduate, recently returned from a four-month deployment overseas where he earned seven awards for distinguished assistance to the US military in Afghanistan. He used his expertise as a Wildlife Biologist with the US Department of Agriculture’s (USDA) Wildlife Services to reduce aviation hazards on coalitions airbases. This was his second tour overseas.

According to a press release from the Animal and Plant Health Inspection Service of the US Department of Agriculture, Smith was “recognized for his efforts by the US Air Force Central Command with the Civilian Employee of the Month, Civilian Employee of the Quarter, Civilian Achievement Medal, Afghanistan Campaign Medal, Global War on Terrorism Civilian Medal and the NATO medal given to service in the Joint Operations Area in Afghanistan. He also received the Civilian Exemplary Achievement Medal granted to Air Force civilian employees who served for at least one year, resulting in profound Air Force-wide documented impact.”

In Afghanistan, Smith conducted hazard assessments and managed wildlife hazards by patrolling the airfields and dealing with multinational personnel to accomplish tasks. Previously, Smith helped assist in the recovery efforts from the 9/11 World Trade Center attacks.

Based out of Wake County, NC, Smith’s typical day at work consists of meeting the public to deal with wildlife problems, responding to disease outbreaks, and instructing classes. He works with the public to handle wildlife damage conflicts. Smith is an advanced explosives specialist and assists civilian and military airport projects.

Before coming to HCC as a student, Smith served in the Army.

Being the first HCC graduate to work for the USDA, Smith has since helped hire numerous HCC graduates over his 25-year tenure. In addition, he serves on HCC’s Fish & Wildlife Program Advisory Committee. “I want to ensure that the curriculum matches current work environment needs and climate. It means a lot to give back where I can,” he explains.

Smith, a Hickory, NC native, came to HCC because it was affordable and had a reputable wildlife program. “Fish and wildlife have always been my passion. Little did I know that the hands-on nature of learning at HCC would serve me well,” he explains. “not knowing one day I would be catching alligators by hand.”